Texas Parks & Wildlife Magazine
September 2003 3 days in the field
Winging It in Uvalde
By Susan L. Ebert
Click here to read the article. 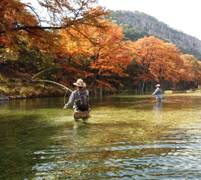 Nov.22, 2009 – Corpus Christi Caller Times
"Revisiting the Hill Country River Region"  by David Sikes
Nov.14th our area River fishing Guide Aaron Riggins & myself took Outdoor Writer David Sikes fly-fishing on the Frio. Read the Column, then click above the photo on Frio River Fishing & the pic will enlarge & have subtitles for the 39 beautiful photos that David Sikes took. Shows the beautiful Fall Color of the Cypress Trees along the river. Click here to read the article.

August 2009 Issue of Texas Highways Magazine
‘From Dusk Till Dawn, Batting Around Texas’  - Article page 40 by Nola McKey and Photos by Larry Ditto
http://www.texashighways.com/index.php/component/content/article/45-hill-country/5975-from-dusk-til-dawn-batting-around-texas
Frio Bat Flight Tours, managed by Hill Country Adventures, hosts the second-largest bat population in the world, as well as hundreds of tourists March through September.

March 2008 Issue of Texas Parks & Wildlife Magazine
‘On the Bluebird Trail’ by Mark Klym - Article page 40  http://www.tpwmagazine.com/archive/2008/mar/ed_2/
Includes interview with LeAnn Sharp VP of the Texas Bluebird Society. LeAnn tells about her experience with Eastern Bluebirds, and how she inherited her affection for bluebirds from her parents.

September 2007 Issue of Texas Highways Magazine
(Cover Photo is the Frio River Crossing below Garner Park)
‘ Hill Country: The Road To Utopia’ -  Article pg.40 by Gene Fowler, photos by Bob Parvin
Tells about All of our Tours & our Rio Frio Lodging.
Photo on pg.43 of LeAnn & Anthony Sharp Telling Stories to guests around a campfire.

4 photos by LeAnn Sharp & 2 by John Hallowell
Story tells about our lodging and many Adventurous Tours. 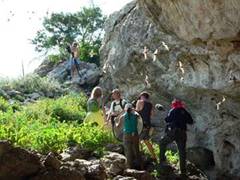 July 16 & 17, 2006 - Animal Planet was here filming for a New Series that Began Jan.19, 2007
'Ms Adventure' - starring Rachel Renstra (a former stand up comic)  Our main guide Bain Walker who has been leading the Bat Tours since 1998 was on the show with her. Bain took her rappelling into the cave, then they suited up, went down inside to see the bats on the ceiling wall, then she interviewed & asked him questions while the bats were flying out. Several of the tourists watching the filming & bat flight got autographs & photos with 'Ms Adventure'. Look for the Series 'Ms Adventure' - Fridays at 8pm Central Time. Bain & the Frio Cave Bats were on the segment called "Cliques" (as in Herds, Flocks, Colonies) Bain did a great job & the filming was awesome!
The Animal Planet web site has a schedule on when it will air again, also photos & videos you can see. http://animal.discovery.com/fansites/ms-adventure/ms-adventure.html